$1.8 Billion spent plus they recently announced that they’re tossing another forty million into the pot (for 20 more party suites and a field level club) in order to lure the Super Bowl here in 2025. Half the stadium is underground... 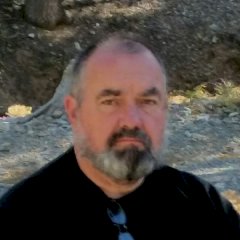 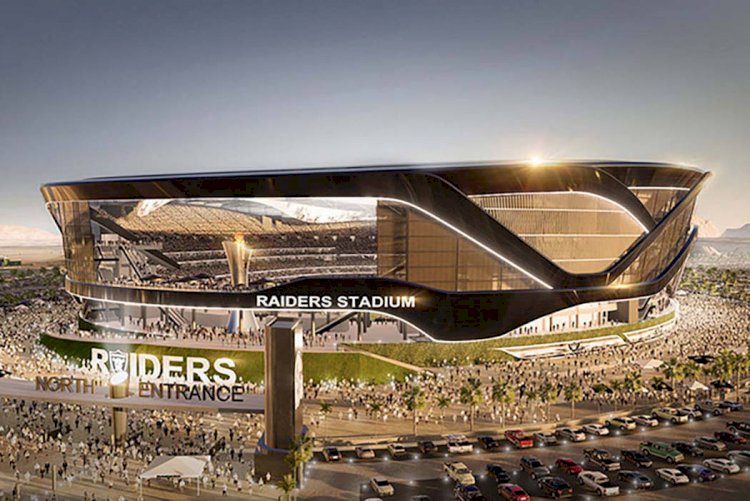 In the spirit of full disclosure, let me just say I don’t follow the Raiders. In fact, I don’t watch football at all. So I’m not for or against any team. But that being said, I’ve got to say I’m getting excited to see what happens with the new Las Vegas Raiders Stadium.

Architecturally, this is a huge project: $1.8 Billion, plus they recently announced that they’re tossing forty million more into the pot (for 20 more party suites and a field level club) in order to lure the Super Bowl here in 2025. Half the stadium is underground, which makes sense from an engineering point of view – it needs less concrete for support structures and sinking the stadium into the ground makes it easier to heat and cool. The walls and roof of the stadium are semi-transparent, providing a view of the Strip from the upper decks. They decided not to go with a roll-away roof. Good thinking, as it adds a lot more cost and complexity to the whole structure. The grass field is on a huge platter that rolls out of the stadium so the grass gets fresh air and sunlight. This is not the first time a roll-out field has been used for a stadium. The State Farm Stadium in Glendale, Arizona has one, so the tech is proven – but it’s still impressive. When the Raiders aren’t using the field, it will be home to the UNLV Rebels football team as well as being available as a concert venue and general-purpose stadium. In a first for the NFL, there will be a designated pick-up/drop-off  loop for Uber and Lyft . As a final touch, a huge chunk of the north stadium wall slides back to offer a lido deck and fantastic views to the heart of the Strip. All for a measly $2 billion dollars. 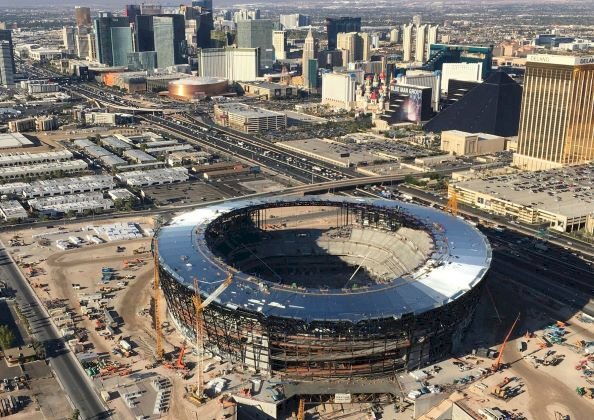 Allegiant Stadium in 2019/via Casino.org

I mean, do you really care that something like 90 million pounds of steel and concrete are going into this behemoth project?  Do you really want to know how many acres of sheet rock, or how many hundreds or thousands of gallons of paint are going into the thing? Sounds like the kind of thing a tech geek would be into.  No, you’re probably excited about the fact that there’s ten viewing decks for a total of around sixty-five-thousand seats. Or that the lighting, sound equipment and internet presence is going to be top-of-the-line, state-ofthe-art from start to finish. Maybe you’re excited to know that there will be a specially designated area for the Raider Nation to have tailgate parties – it’s actually going to be in the space normally occupied by the rollaway grass field. Or if you’re a Rebels football fan, you’re probably excited that your team will share the stadium – but not the grass, sorry.  A special Astroturf playing field will be rolled out for them. Hey, this Vegas – go big, or go home.

Of course, Raiders fans are thrilled to have a new stadium. A Las Vegas location is just icing on the cake.

All features and amenities aside, I’m excited to see the new stadium for a different reason.  I feel like I’m watching the city of Las Vegas blossom in front of my eyes.  Compared to cities like New York, Los Angeles, Chicago, even Seattle or Kansas City, this has always been kind of a one-note town.  Las Vegas has historically been solely about entertainment – specifically gambling.  This is the place people come to play, but not to stay.  But now everything is changing right in front of us. First the Golden Knights, and now the Raiders, are turning this into a city with real sports teams, not just sports betting.  We’re turning into a real city, even (dare I say it) into becoming one of the great cities of America.  The arts are growing strong here, tech startups have begun seeing the sense of moving here, and I believe it’s only a matter of time before huge companies and important people start calling Las Vegas home.

If you’ve ever wanted to watch the rise of a golden age, then watch Las Vegas closely. This is the place, and this is the time.

Brian Dodd is a writer, actor and artist living in North Las Vegas. He has had several careers over his lifetime, including Architect, Engineer, Car Salesman and Air Force officer. He currently earns gas and food money working Tech Support for LV Net. He has a wife, a son and several demented house pets.

Reggae on the Roof is a live music and DJ concert series that happens once a month...